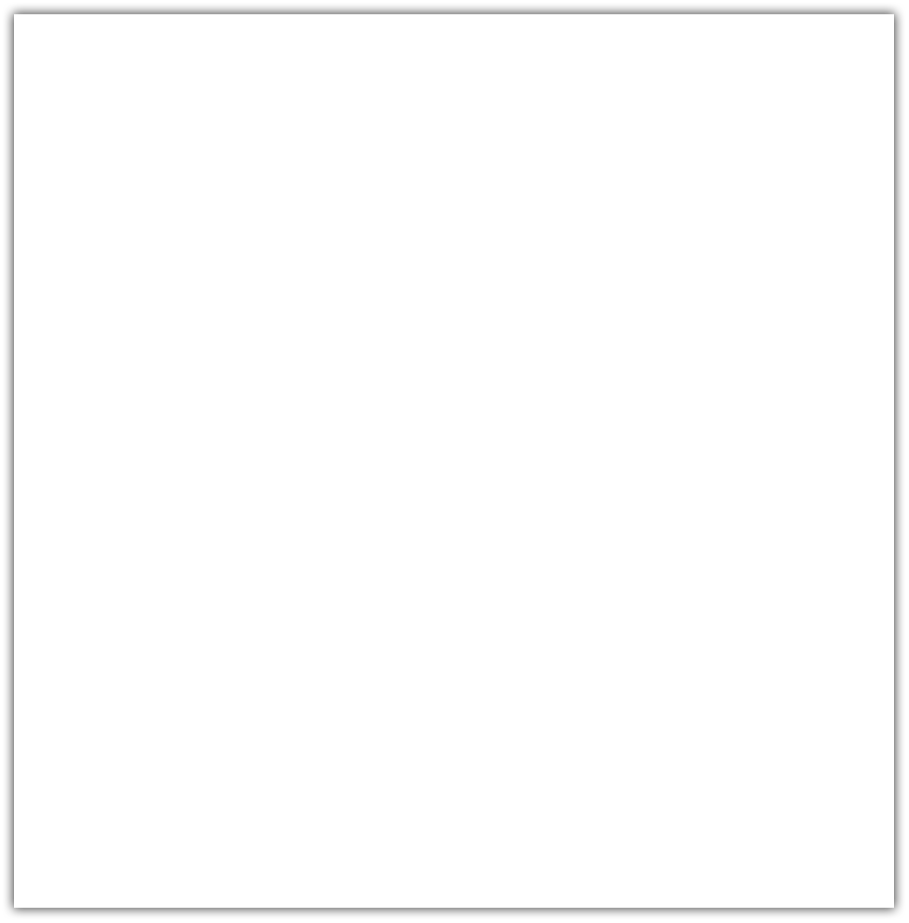 1
Sacred Strings Records Inc.
Double click here to add text.
Double click here to add text.
The Queens Sacred Steel
It’s not clear who the first female sacred steel player was, but in later years, a small sisterhood of female players have emerged from the shadows as trailblazers playing just as skillful as the male steel players and have successfully put their unique spin and stamp on the genre. 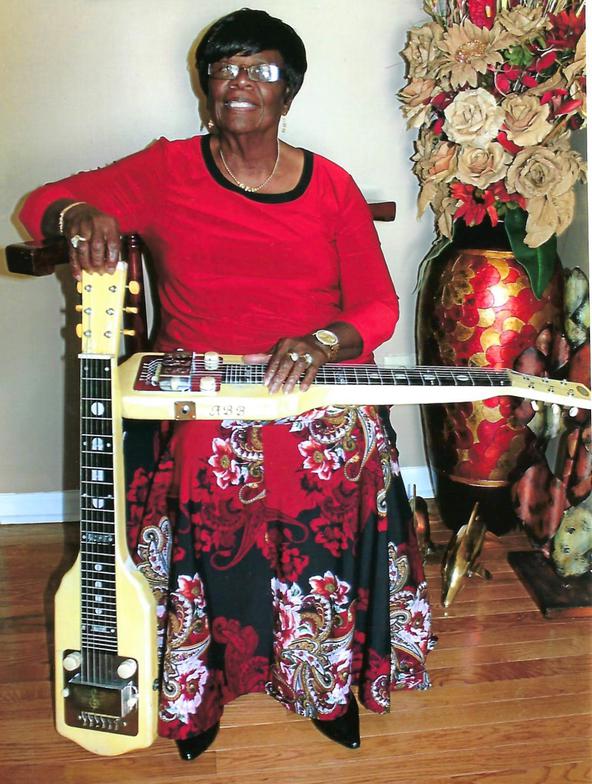 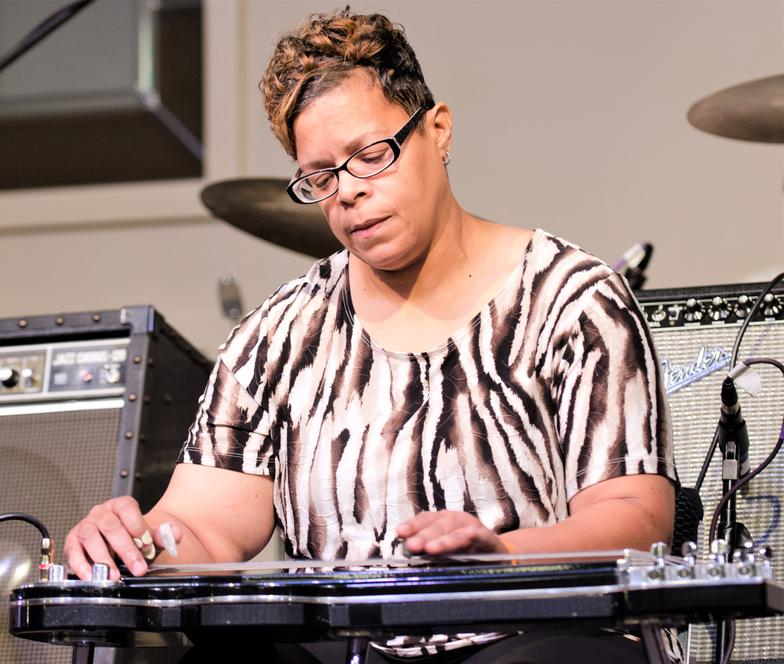 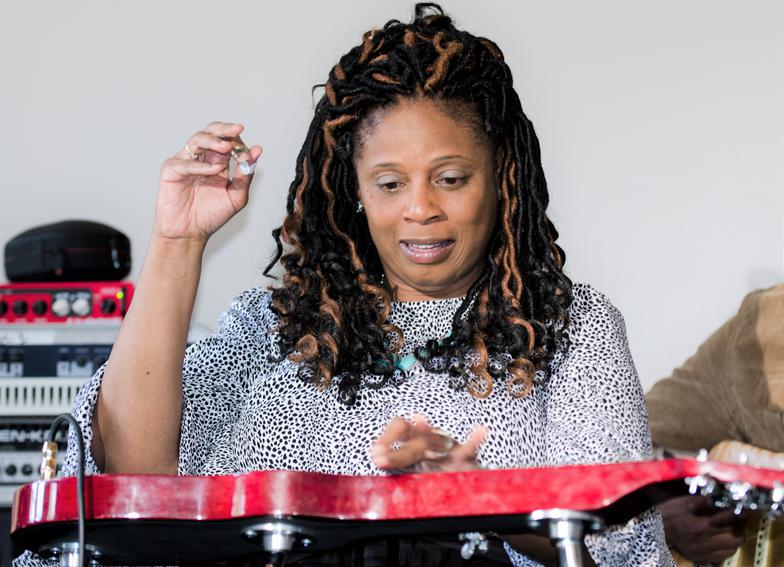 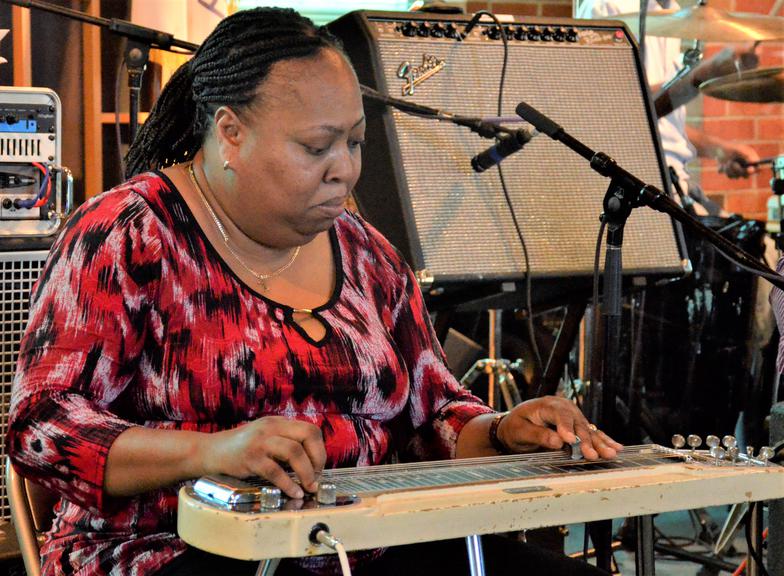 Kim Love Mclendon
Kim was born in Philadelphia where she still lives with her husband, Fred and daughter, Ashley. Her earliest musical influence was her uncle, James Robert Postell who she watched with a steady eye at a very young age as he tutored many adult men aspiring to learn to play the steel guitar.
No one realized that the reason she was watching so intensely was so later that evening, when no one was around, she could hide behind the credenza where Uncle James kept his instrument and mimic what she had absorbed earlier. Some years later she stood in awe of the sounds emulating from the “Doctor” as we called him, the late Bishop L. L. Harrison. This gave her another spin to add to her musical repertoire.
His rumbling bass tones, chords, various tunings and precision drove her bananas. As a teen she started playing steel guitar and rhythm guitar in the Church of the Living God where she was given much opportunity to expand on what she loves, “MUSIC”.
Annabelle Bowen
Mother Annabelle Bowen currently lives in Johns Island, South Carolina. She was born November 4, 1939 to Isaiah and Lucinda (Smalls) Robinson, in Charleston, South Carolina. Annabelle was taught the basics of the Hawaiian guitar from Bernard Sweetwine, who played at the Reform House of God. click here to add text.
After three years of practicing, Annabelle began playing publicly in 1970 at the Mt. Aaron House of God Holiness Church, where Bishop Aaron Moore Sr. was her pastor. Annabelle is the mother of six children, Samuel, Gwendolyn, David, Shirley, Barbara, and Spencer. She has recorded with noted songwriter, psalmist and musician, Christal Brown-Gibson on the “Bringin it back home” Cd. Mother Annabelle Bowen is currently a member of the Faith Harvest Ministries in South Carolina.
Fran Ella Grace
Fran was born July 26, 1965 to the union of  Curtis and Loretta Brownlee Grace in Toledo, Ohio. She is number seven in the birth order of eight children. Fran is the mother of two wonderful children, DelMar Christopher and Danielle Pope and the grandmother of three.
Fran served at the Stateline church of the  l.iving God, Jewell Dominion, under her grandmother, the late Bishop Ella Mae Dupree. She began playing music at the age of nine years old and became an as needed musician. Whatever instrument was missing out of the band she filled in. She plays steel guitar, bass, rhythm guitar, and drums. Fran would also sing in the choir and with her sisters Angela Grace Russell and Tressa Boles. Her sound is old school, and her brother Del gave her the opportunity to play full church services giving her the confidence to play.
Her role models are Bishop Lorenzo Harrison, Ronnie Mozee, Wayne White, Tubby Golden, and her brother Del Ray Grace. Fran was inducted into the 2019 Queens Sacred Steel Hall of Fame in Toledo, Ohio. Fran's greatest example of how a musician should be in God’s house was her brother Del Grace, not selfish at all, never intimidated and very confident
Lisa Lang
Lisa Lang, was born on July 5, 1970 in Ft. Pierce, FL. At an early age her interest in music was discovered when she started playing the drums at the Ft. Pierce House of God #1 church. Her interest then spread to other instruments such as the bass guitar, saxophone, organ and keyboard (self taught). After serving many years under Elder Aubrey Ghent, Lisa moved to Miami FL in 1993 and took a big interest in learning how to play the steel guitar.
She was heavily influenced by Elder Aubrey Ghent and the late Rev. Glenn Lee. Lisa played her first service on December 31, 1996 at the Brownsville House of God church. She credits steel guitarist, Brian Byrd for teaching her the basic foundation of how to play the lap and pedal steel guitar.
Lisa's smooth, soulful and charismatic style of play has allowed her to minister in numerous services, festivals and showcases which earned her the name " The Lady of Steel". In 2002 Lisa recorded her first project titled "Lady of Steel" and followed that release in 2007 with her sophomore project entitled "I Feel Good". Lisa was inducted into the 2019 Queens of Sacred Steel Hall Of Fame. 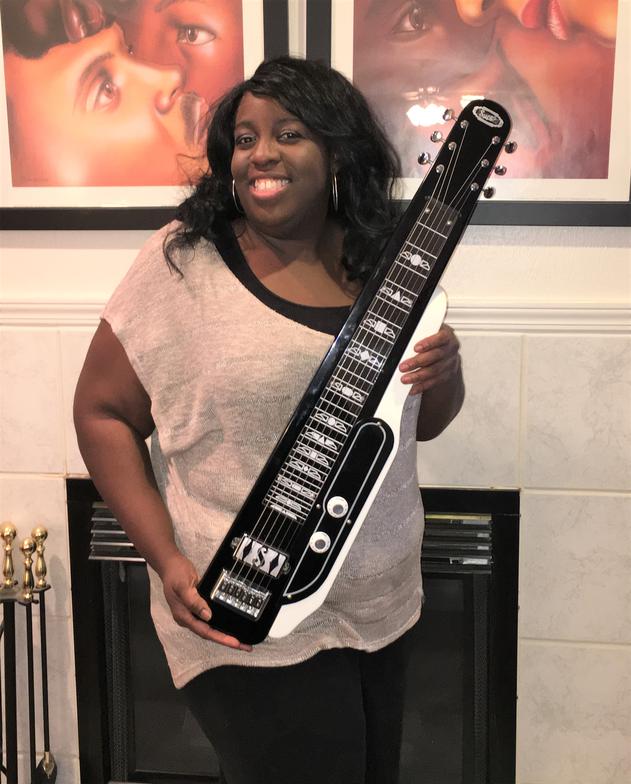 Nicole D. Brown
Nicole “Nikki D” Brown, born August 19, 1971 to Curtis and Ruth Brown in Toledo, Ohio. Nikki began playing the Hawaiian steel guitar at the age of eight years old as a member of the Soul City House of God, International Church.
Nikki’s parents purchased her first Fender lap steel guitar from Durdell’s Music, a local music store in Toledo, Ohio, she also received her first lessons from Ruth Durdell. Her sacred steel influences were Yolando Ramsey, Henry Tyson, Fran E. Grace, Greg Newell and Del Ray Grace.
​Nicole is the lap steel player and lead vocalist with the Brown family singers, a family gospel quartet group founded by her parents. Nikki later formed the Sisters of Thunder in 2011, a sacred steel band consisting of her three sisters, a nephew and a niece. She has performed at the 2018 Black Swamp festival with the Slide Brothers, and also the 2019 Black Swamp festival with her own band as headliners on the main stage. Nikki teamed up with Dom Turner, an Australian blues guitarist, to form the Turner Brown Band. 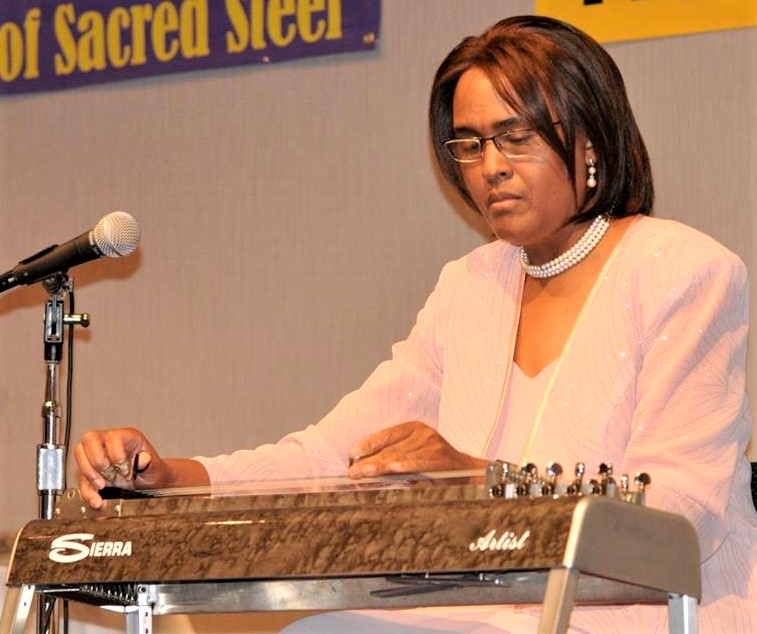 Maurice Jean Bradley
Maurice was born April 3, 1949 to the union of Freddie Diggs, Sr and Lizzie Mae Diggs in Quincy, Florida. She has four siblings: Larriel Diggs, Freddie Diggs, Jr., Robert Diggs and Mary Diggs-Hobson.
Maurice was educated at Midway Elementary and Crooms High School, both in Sanford, Florida. She later attended Monroe Community College, Rochester, NY. and Allen School of Health Sciences, Jamaica, NY
My first steel was an 8-string Fender. It belonged to my first Pastor, the late Bishop Sylvester J. Burke. He would let me use it to try to play during Church services. My first lessons were by Andre Miller at about the age of 28 or 29 years old. Maurice served at The House of God Church, Rochester, NY under the leadership of Trial Bishop Harry H. Haygood, Sr.
She was influenced by several players: Andre Miller, Calvin Cook, Maurice Beard, Chuck Campbell, and Lonnie Bennett. Maurice was inducted into the 2019 Queens Hall of Fame in Toledo, Ohio. 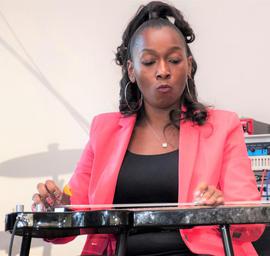 Mariah House
Mariah House was born on December 6, 1987 in Chicago, IL. She holds a bachelor’s degree in Psychology and a master’s degree in Elementary Education, working as a teacher in the Chicago Public School system. She is also married to Robert House and have three children.
Mariah was raised and reared in the House of God, Keith Dominion from birth; she often witnessed four women musically hold down service at any given time throughout the years, which unknowingly and gradually sparked her interest in music. She developed an ear for music at an early age, teaching herself choir song melodies on her mothers’ piano at 5 years old. Mariah began playing the violin at 8 years old but secretly loved the bass guitar! Soon after, Mariah became a member of the Chicago All City Bands from the 5th-12th grades, playing the alto and baritone saxophones.
When her mother and church organist, Deaconess Shirley Whitker, passed away in 2000, Mariah began taking piano lessons to fill the need in the church, soon becoming the church organist. Within this time Mariah also learned the bass guitar and played for her state events. Mariah always admired the distinctive steel sound, initially finding interest in 2010 but didn’t pick it up & begin playing in services until 2017. Mariah’s goal for her music ministry is to stay true to herself while playing to the glory of God. 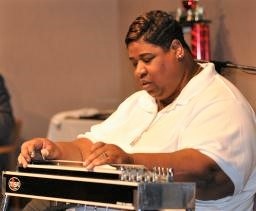 Double click here to add text.
Teresa Jackson
At an early age Teresa knew that she wanted to play the guitar. She first saw Frieda beard playing the guitar. And knew that’s what she wanted to do. Her dad used to take them down to what they called Jew town in Chicago and there they would listen to The Blues guitar and that’s when she fell in love with the instrument.
Anthony Harmon taught her how to play the bass guitar and after that the Holy Ghost did the rest. She has been playing the bass guitar for over 35 years and is self-taught on the steel guitar which she has been playing for over 30 years. She has traveled to other states to play for different churches.
She wanted to be an anointed musician so when Bishop Elliot came to one of their assemblies there she went up for prayer and had him anoint her hands.
And after that she was called his Hawaiian girl. She counts it a blessing to have played the bass with some of the best steel guitarist in the church, Ted Beard, Calvin Cook, Gary (Fat man) McKinney, and Andre Miller. Due to physical challenges with her hands. She only plays at her local church but is teaching other young people. 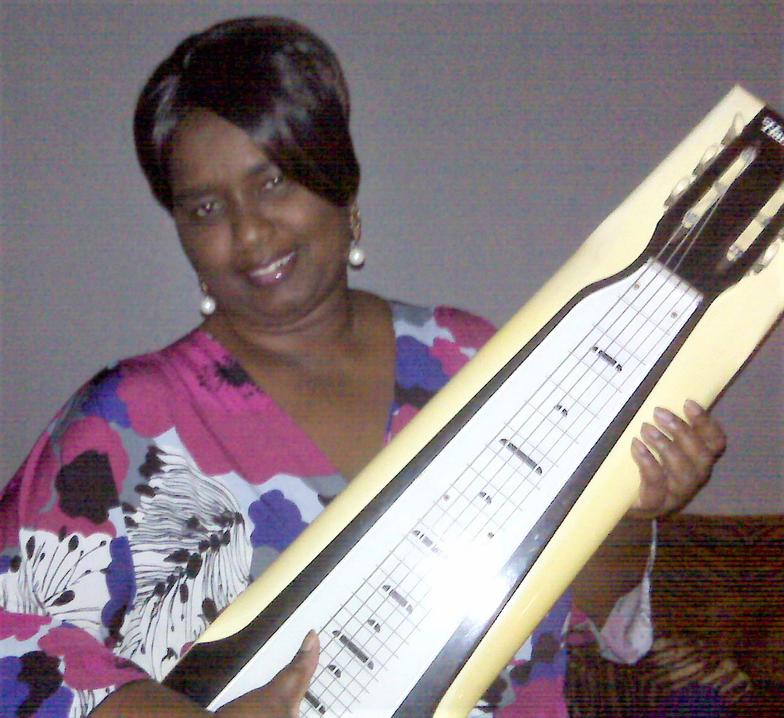 Shirley Washington
Shirley, born December 14, 1962, the 7th child of Eartley and Angiereen Washington in Charleston, South Carolina. Shirley was born into a musical family and started learning the piano, and organ in 1967 at five years old. By the age of ten, she began playing in local church services.
Eartley Washington, Shirley’s father, was a multi talented church musician in the House of God Church, Keith Dominion, under the leadership of Pastor Elder Leroy Middleton. Eartley played piano, organ, harmonica, and Hawaiian steel guitar, all of which he imparted in his children and grandchildren.
Shirley along with three other brothers, were influenced by their father to carry on the steel guitar legacy. At the tender age of twelve, she started practicing on her father’s steel guitar and after much preparation, she started playing the steel guitar in local House of God Church services in 1974, establishing herself as the second female steel guitar player in Charleston SC. 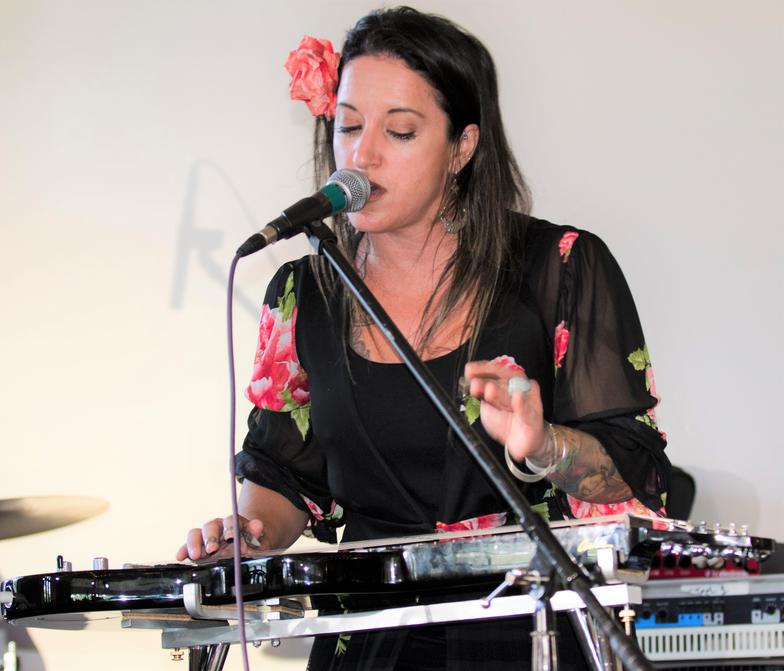